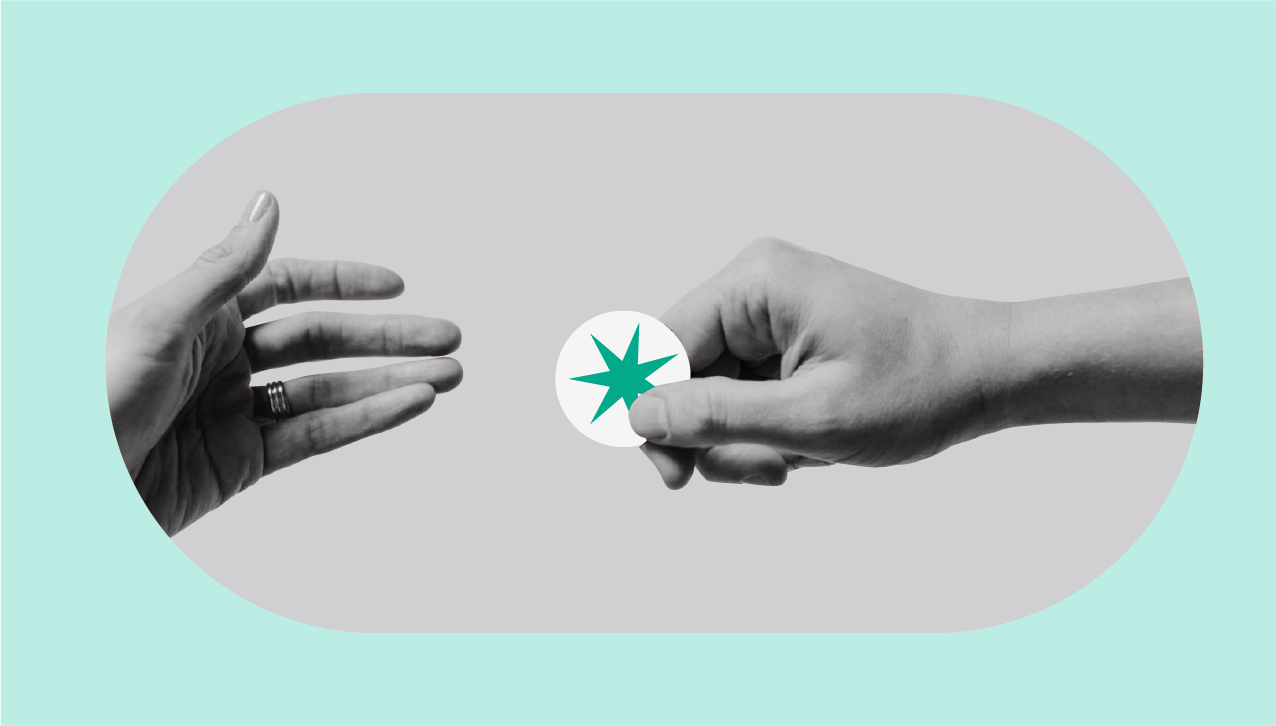 The word consumer is dominating our world. Take a quick look around the ol’ Net and you’ll see it everywhere in retail - terms like:

When referring to markets, customers, prospective customers, and people in general, we have no hesitation calling them consumers. DTC in particular has taken over the past few years - it’s practically a lifestyle, a category, a content motif, and more - to the point of even having its own elite.

Being a consumer is distasteful. Even in the early 20th century it was worrying, as exemplified in the Patrick Barrington poem, I Want To Be A Consumer.

Yet, today we see society reject the idea of consumerism. For example, popular parental guidance movie review site, Common Sense Media, screens movies for favorable portrayals of consumerism so parents can protect their children. The last thing moms and dads want their kids to identify themselves as is consumers.

People are more than consumers. Consuming is not at the heart of commerce.

The problem with our industry’s warm embrace of the term direct-to-consumer is that no one wants to be called a consumer - not even we the people of this industry. It’s insulting to picture yourself as this sort of mindless infinite pit that items are tossed into, never to see the light of day. Imagine replacing all of your references to your customers or potential customers in public facing communications to the word consumer. It wouldn’t fly.

What is commerce if not a vehicle for consumption?

Another word - transaction - is the true heart of commerce. What is a transaction? The dictionary (Miriam-Webster) definition is “an exchange or transfer of goods, services, or funds”, but also “a communicative action or activity involving two parties or things that reciprocally affect or influence each other.” Transaction is co-influence. Influence is the transfer of will or wish upon another entity. Will and wish are the outflow of identity, which means transaction is identity transfer.

One side of the transaction is what you receive. Think about it - when you buy something, you’re going to make that item a part of your life (or someone else’s as a gift) - you might wear it, eat it, display it, use it to accomplish something, or maybe some combination of these things. You make it part of your life. The lamp I bought at Target is in my field of vision nearly every day, and provides aesthetic and character to my living room.

The flip side of that transaction - money - is also part of identity. Nearly everyone invests a significant portion of their energy into earning or stewarding money. That’s identity. It’s been said “where your treasure is, there your heart will be also.” It represents labor, career, tradeoffs, saving, investment and more - which is a large part of people’s lives.

A power balance that gives you insight into your customers

How people choose to use money is perhaps a better marker of identity than any other indicator. They say eyes are a window to the soul, but bank statements might be the better window. Where people spend their money is an indication of their needs, tastes, friends - of their hopes and dreams.

This is especially true when the purchase is a transaction that’s made with no undue influence involved. Transactions made of free will or without constraints are more likely to be the truest representation of the purchaser’s identity. If the purchaser feels like they have no alternative but to make the transaction, it might not fully represent their ultimate aims. This is important because purchases of choice often best represent a fair balance of identity influence between the involved parties, whereas purchases of necessity (or even perceived necessity) are the most likely to be transactions that don’t indicate fair identity transfer (typically the imbalance of power leans toward seller and their identity transfer overwhelms the buyer’s).

A purchase of choice can sometimes supersede the purchase of necessity, which is often one of the best indicators of identity. The buyer is sacrificing something they need or is resisting undue pressure to acquire something they care about. While this marker is perhaps one of the most important signals of brand affinity, it’s nearly impossible to track tradeoffs in purchasing. However there is a marker that’s similar, perhaps even more important, and 100% trackable: donations.

Giving is the transcendent transaction

They’re the transfer of money from one entity to another in exchange for… knowledge that money will be stewarded to accomplish things the donor cares about, considers important, and/or believes in.

This is still a transaction, but it’s a transaction that is wholly identity-based. The giver receives nothing in exchange other than the knowledge of what their money is going toward (ok and a tax break). They’re the ultimate transaction of choice. Transactions typically support - and sometimes even shape - identity, but donations are pure outflow - top-of-the-heart (demonstrating what the heart is full of) engagements.

Discounts have been the traditional method to destabilize the balance of power and enable transaction, but offering donations is superior to offering discounts because they keep the strength of the brand’s identity intact, which is essential for that balanced identity exchange between brand and customer. This isn’t to say that discounts don’t offer value - sometimes that’s necessary for that balanced exchange. But unlike discounts, donations deepen the customer’s connection to your brand. Instead of associating you with offers (and waiting until they’re valid to purchase), people will see your brand as one that’s willing to help them invest in causes they believe in. That close association means they’re more likely to choose you again in the future, even over a competitor offering a discount.

Giving can be at the convergence of brand and customer identity which will spur more and better transactions. However for this to work, brands need to be able to provide customers with choice, demonstrate affinities, and measure and respond to engagement. Here are some tips for how to do this:

Allow your customers to choose whichever charity they want. The concept of combining charity and business is by no means novel, but it hasn’t always generated a positive response.  People have been burned by brands who promised to, say, plant 200 trees for every water bottle sold and then either didn’t do it or never reported back. They need to know their donation is being applied the way they expected it to be. By giving them choice, you’re actually increasing the value of the exchange, because not only do they get to pick something they care about, they also feel confident in that charity’s usage of the money.

The ultimate statement of trust is giving customers the freedom to choose whatever charity they want. Research has shown that when customers were allowed to choose which charity they donated to, they spent three times as much, compared to when they were offered a limited list.

While choice is essential, it’s also important for customers to understand what your brand cares about - what is consistent with your identity. When you give customers choices with no alignment, the danger is that they disconnect their gift from your brand - or pick a charity that is out of alignment with your identity. There are thousands of charities to choose from, some more aligned with your company’s values than others. Providing choices doesn’t have to mean unlimited. You should exclude charities you don’t believe in, and curate a list of recommended charities when running a targeted charitable campaign, another incredible tactic.

If you decide to provide a shortlist, don’t make it too long. Even the best-intentioned people will not scroll through descriptions of 10 charities, meaning the ones at the end of the list won’t get any donations — bad for them and for your metrics.

Make the giving experience clear and interactive. Avoid burying messaging about purchase-driven donations from some vague promise buried in the about us or on a digital ad to instead make giving an activity the customer participates in and sees through. This process provides a tangible experience that leads to a greater connection between your brand values and customer’s charitable alignment.

3 | MEASURE AND RESPOND TO CUSTOMER ENGAGEMENT

Seeing which charities people support gives you additional insights your business can use to find more customers. By widening the net might also give you a more accurate picture of what people really care about. People who buy dog collars have other interests, and knowing more about those might help you identify markets that overlap with your own. For example, if you find that 90% of your customers donated to a dog rescue charity, compared to 10% who gave to a clean water charity, you know that you should be targeting animal lovers in your social media campaigns. If one charity in particular is attracting the most donations, consider reaching out to them about a partnership.

Compare your conversions for emails about your donation incentives to ones sent for a discount and to emails without either type of offer. See what customers have to say about your donation incentive. Check email responses and social media comments to gather customer feedback. You should also pay attention to positive engagement and high click-through rates. Even if these things aren’t direct written feedback about the incentive, they still correlate with a positive brand perception.

Don’t be shy about promoting all the giving you’re supporting. Statistics like how much you and your customers have donated, and lists of the charities you’ve supported, are important for people to know how you’re influencing the world for the better.

This isn’t just sunshine and rainbows - charitable alignment is necessary to secure the future of your brand. High-purpose brands double their market value 4x faster than low-purpose brands. In a recent campaign, H&M experienced a 15% conversion rate and a 7x increase In customer engagement from their emails about their donation incentive.

People are considering the full impact of their money as they make purchases. It’s not just about mindless accumulation and consumption of stuff. It’s about people offering up the fruits of their hard labor (read: money) to acquire things that reflect the people they want to be - which includes the causes and charities they care about. If you can give them a vehicle to donate, they’re going to weigh this in the cost of their transaction.