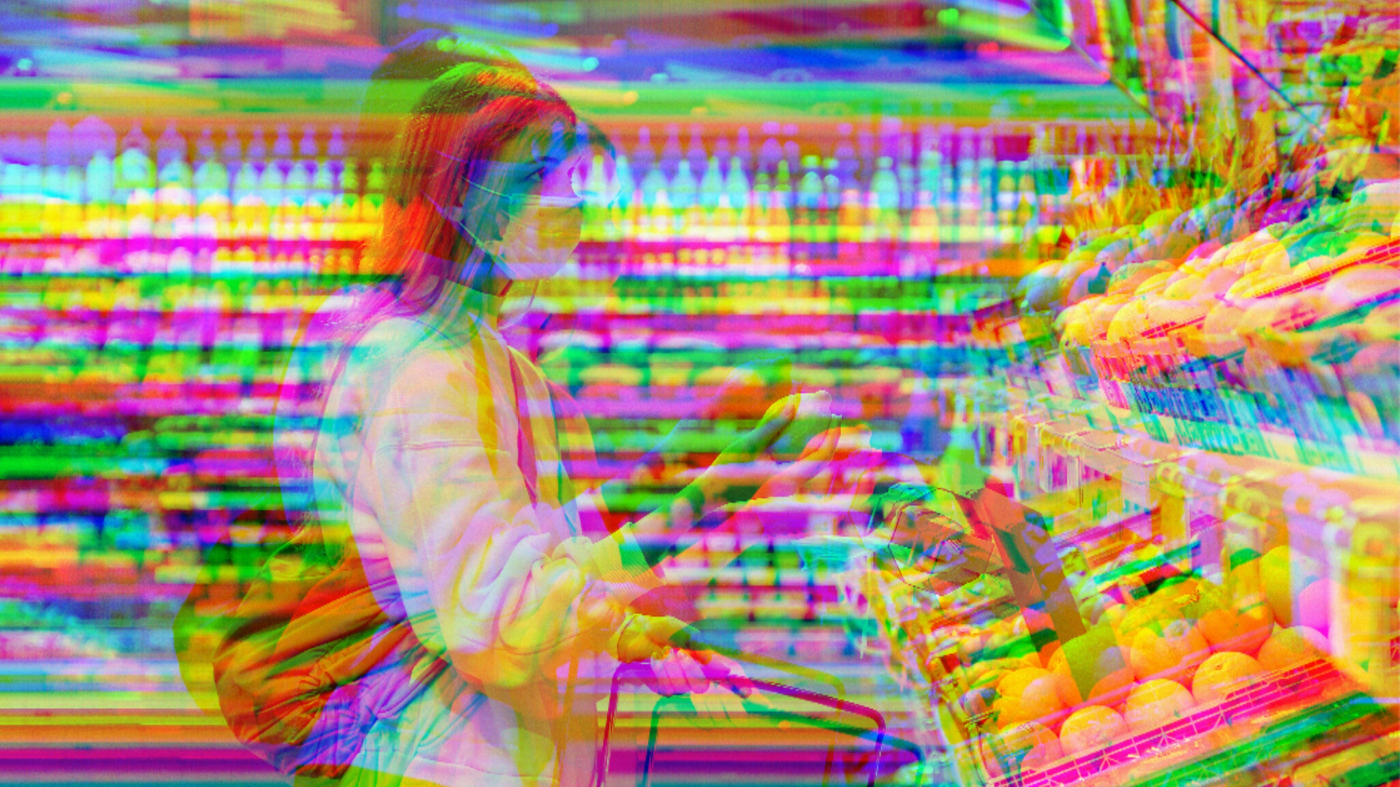 This may be a blasphemous statement in modern times, but I prefer to shop in an actual store. This isn’t to say I don’t shop online, or that I don’t overuse the Sephora app, but for me being able to go into an actual store, to interact with other people, and to curate my selections in person has always been one of my favorite things to do. It’s an experience, and even going to Whole Foods has always been a form of retail therapy for me.

But for me, and for a lot of the people I’ve had the opportunity to speak to on this topic, that shopping experience has shifted into something else, and become a less than enjoyable experience.

In his recent essay in The Atlantic, Charles Yu called the pre-pandemic world the “real fiction.” In our new reality, the pandemic has made in-store shopping more complicated and created a two-way anxiety lane. Am I the only one who feels intense anxiety going shopping? Shopping used to be a fun event. Now? It requires intense planning and caution.

Sure, there’s Shipt and Uber Eats and Instacart, but there’s also separate anxiety that comes from staying home for too long. I can tell you I have experienced this first-hand since February.

A trip to Whole Foods feels like a scene from a movie. Signs remind everyone to stand at least six feet apart, mandatory mask wearing for both employees and customers, and X’s on the floor feel otherworldly. A plexiglass barrier between cashiers and customers that brings to mind going to a liquor store in New York City.

These safety measures almost feel like real-life metaphors for the distance that online customers have felt with brands for years. It’s hard to connect with people on a personal level when you have layers of protective fabric and glass separating you.

The masks. Let’s talk about the masks. These aren’t your run-of-the-mill surgical masks or N95 masks but are way more artsy than that. These are nouveau luxury and a new way to accessorize, and flex, your values.

These precautions make us safer, yes, but that doesn't make them less jarring. They serve as constant reminders that we are all in danger.

Anne Helen Petersen at Buzzfeed wrote a brilliant article this week entitled “The Social Media Shame Machine is in Overdrive Right Now” - and this was a particularly insightful quote:

Our first inclination is often to try to solve the puzzle of contamination: Where’d they go wrong? And how can I avoid it? It’s policing masquerading as detective work.

We need to have some empathy not only for people who dare to venture out but also the workers who are going to work because they are also constantly putting themselves at risk.

My friend Ben Virdee-Chapman from HiConversion told me that his whole shopping experience has shifted, and what used to be a family activity and experience has turned into just a necessary run for essentials. He mentioned that he had become more tactile about purchasing and that buying in bulk had enabled him to make less frequent visits to the grocery store.

Shopping used to be therapy. Now a trip to Target has become something to get done as quickly as physically possible to avoid getting too close to anyone. No wasted time, maximum efficiency.  I need therapy from post-shopping PTSD!

If you know me, you’ll know my superpower is to strike up a friendly conversation with almost anyone, and remember their name later. That’s no longer socially acceptable. Stores, and checkout lines, are practically empty with people preferring to do in-car delivery and pickup.

People physically walk in the opposite direction if you dare to go near them. If you do find yourself in a conversation with other shoppers it’s composed almost entirely of discussing different types of masks that people are trying out. I just learned I need one that has a filter.

One-way aisles are an allegory

I was curious about how other people were tackling going grocery shopping or putting themselves in situations where they had to go in-store, so I asked around. And I got a wide range of experience from people who had to leave their homes to shop. I was surprised that almost everyone I spoke to had been at least grocery shopping, but that might speak to an ability to receive grocery delivery, but also to people needing to maintain some sense of normalcy.

We have a new set of cultural norms that not everybody has learned yet. There are some that will take longer to learn than others and new ones that haven’t even been established. There’s no “COVID rulebook.” Practices differ from store to store, and some essential businesses have taken virtually no precautions at all - gas stations, for instance. Gloves, wipes, sanitizer - nowhere to be found at most major fuel stations.

Kiera Abbamonte DM’d me on Twitter to explain grocery shopping has become super regimented with strict protocols in place that keep bringing her back to the harsh situation at hand, which can be incredibly anxiety-inducing. Mind you, we haven’t really reopened America yet. When people flood back into stores we will have newer hurdles to face.

Some of the people I spoke to described extensive sanitizing routines pre-and-post going anywhere outside the house. Some noticed an immense amount of hoarding that was going on for weeks, with Lori Anding telling me it took her five weeks to locate any toilet paper and massive shortages of essential products where she lives.

The local grocery store created a one-way design for foot traffic, the plexiglass went up in front of cashiers, and masks and social distancing were being enforced. The energy there got more intense as the weeks progressed. I spoke with someone at Trader Joe’s a couple weeks ago who said they just couldn't stock the shelves fast enough and that’s when they needed to put limits on what people bought. @southbaysome

Many ways to be in danger, few ways to stay safe

My friend Adrienne Barnes describes a pretty impressive routine, and also some of the strange goings-on that have resulted from some of these protocols that might be hindering their effectiveness.

There’s probably a lot of conversations going on behind the scenes for stores that have stayed open that we as consumers are not privy to. Teams are probably trying to figure out the best way to handle the situation and keep employees and customers safe, without a doomsday-esque feeling.

There were people who responded to my Twitter query who had not been anywhere since March, which makes me wonder how they are holding up through all of this? Maybe they have an emergency supply pantry filled with canned goods that never really expire?

It also seems that there’s a weird eeriness and parallels that some people are experiencing when going in-store grocery shopping, where some people are panicking and taking severe precautions, with others not taking the situation seriously at all.

Other people, including Haley Griffis, who happens to co-host one of my other favorite podcasts MakeWorkWork, and also does cool things at Buffer said that there were few people wearing gloves and masks at first but that has changed over the past weeks. She described a more somber experience at the grocery store, where people were social distancing and there was less conversation happening within the grocery store (she’s been going every two weeks).

If home is a place of safety - isn’t it sad to see that people are struggling to stay at home as well? It’s no longer a place of rest or refuge - it’s a place for… well, everything.

One Uber driver I spoke to mention that he had driven a manager at Walmart earlier in the day, and he asked about what the situation was like since Walmart had remained open (with some modifications and changed hours). The manager described a situation where some people would come into Walmart just to walk around for hours to get out of being stuck at home. “Walmart has become like Disney World” was how he put it, which is not something I ever thought I’d hear anyone say.

So what will happen next?

At some point states are going to have to reopen, people will have to go back to work, and stores will have to reopen to survive. And that’s something that will obviously have to be watched and monitored, but months into this pandemic, and with possibly months to go, what will be the new normal?

One thing is clear - social distancing and vigilance will be the new social norm from here on out. We will create new routines, we will adapt to new cultural expectations, and we’ll collectively buy into the new baseline of whatever “normal” is.

If I’m honest, these answers lead to so many more new questions.

Usually, we offer some insights or advice to brands as a part of Insiders, but the only advice I really think I can offer is to the people currently experiencing this:

Be empathetic, because everyone is just trying to figure it out right now, be careful and cautious as you go out into any stores or business (wear a mask), and take care of yourselves because we’re all in this together at this point.

And be kind to employees in-store, they’re also just trying to figure out what to, and how to keep themselves and their families safe.

And as has become a common greeting at this point between people: Stay safe, stay healthy, and good luck.