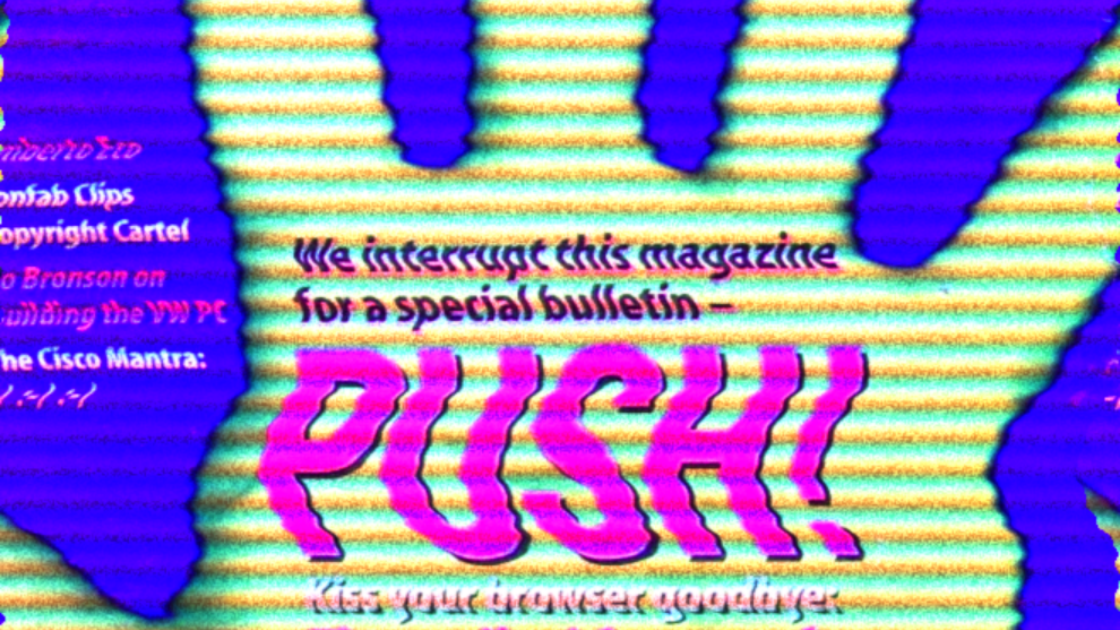 Twenty-five years ago, Wired magazine wrote the future-focused article, Push! Their assertion was that the web would evolve from a pull-model, where you make requests for pages on a primary computing device; into a push model, with media and “web objects” being pushed to you on devices of various types.

Over the course of the next fifteen years this article became the punchline of jokes. Through the browser wars, the dotcom bust, the rise of Blackberry, and then the advent of the iPhone, Push! seemed to be a far-future vision that would never come to be. That is, until today.

The concept for Push! seems obvious today, but consider that the following was written in 1997:

Technology that, say, follows you into the next taxi you ride, gently prodding you to visit the local aquarium, all the while keeping you up-to-date on your favorite basketball team's game in progress. Another device might chime on your wrist, letting you know that the route home is congested with traffic, and flashing the address of a restaurant where you can eat cut-rate sushi while waiting it out. At home on your computer, the same system will run soothing screensavers underneath regular news flashes, all the while keeping track, in one corner, of press releases from companies whose stocks you own. With frequent commercial messages, of course.

With Web 2 fulfilling the futurist world of Push!, we now begin to see web3 unlock the commerce value behind it. Tokens and airdrops are a modern incarnation of the original vision of Push!

What they unlock is a new take on an old type of ownership model; except that it is entirely internet native. Meaning, there are few, if any, IRL analogues to the value model that airdrops create.

“Never been done before”

If you’ve heard a web3 adherent say “airdrops have no real-world analogue”, forget it. That’s incorrect.

Airdrops have been around for centuries. Community gardens, consumer co-operatives, borrow-a-book stands, are all very much still around and alive. But a great, canonical, example of the airdrop is how Bank of America created the credit card.

On September 18, 1958, “Bank America” distributed 60,000 BankAmericards to local residents of Fresno, California. From a 1994 piece in the Washington Post on the subject:

That's a word they liked to use in the credit card business to characterize a mass mailing of cards—a "drop"—and it is an unwittingly apt description. There had been no outward yearning among the residents of Fresno for such a device, nor even the dimmest awareness that such a thing was in the works. It simply arrived one day, with no advance warning, as if dropped from the sky.

The very first modern example of consumer credit was an unsolicited benefit based on your locale, dropped upon you as if from the sky. Today’s airdrops are very much the same. In October, the Ethereum Name Service, or ENS, issued a token for all ENS domain holders, which represented thousands of dollars of value being created out of seemingly thin air. On Christmas Eve 2021, OpenDAO issued a token (called $SOS) based on a snapshot of those who had interacted with an OpenSea contract at any point in the past.

The premise of Push! was simple: the web would unlock the ability to create a new type of content syndication based on your identity, your community affiliation, or your prior activity.

Because activity on the blockchain is a public ledger, participants can be easily identified, unlocking the ability to reward token holders based on the date of their past participation. In Web3 parlance, a “snapshot” will take place on a particular datetime, defining the eligibility of a particular group for a reward, a token, or an airdrop.

The latter, the airdrop, requires the issuer to push an asset to the public ledger, and give ownership to the particular wallet that was defined as eligible. The issuer will incur a cost, but the experience of the holder is unparalleled: they open their wallet to discover that there is new value therein. This is a new type of CX—Customer Experience—that few brands are currently taking into account. Consider the implications of Tesla being able to identify what tokens and assets their customers hold based solely on the use of the wallet during the vehicle purchase. How much more accurate will customer segments become when all transactions that were once-opaque are laid bare for retailers to examine in-situ?

Push could change the way that we define affiliation by redefining how we deliver unexpected value to a potential audience.

The web3 model has an inverted value system to Web 2. Consider for a moment the benefits of Web 1, Web 2, and Web 3:

A replay-able, public, executable, open, and utility-driven internet is what we were promised all along. It just took a little longer to get here than we had anticipated. At present, the utility of the blockchain seems to be benefiting from the relatively small number of users by comparison to the larger, traditional internet.

While Web 2 and other “traditional media” have become much more niche, more highly targeted, more segmented, than ever before; web3 seems to suffer from a sort of monoculture. There is a groupthink dynamic happening in Discord and on Twitter—where any project becomes a pivotal moment. Be it an NFT collection that allows you to emulate the feeling of being the owner of an Olive Garden franchise, or a member of a DAO attempting to buy a golf course, these projects are all known and quantified.

Mass media is so plenteous that monoculture effectively no longer exists. The value system of mass consumer also appears to be inverted from the present value system in web3. In a tweet from Magdalena Kala, a consumer investor and web3 proponent, she lays out the argument of this inversion, with the example that, while crowdfunding was a red flag in Web 2, it is a core tenet of web3.

Part of this crowdfunding model is the anticipated value of future utility, and airdrops are part of this. Because the ex-dividend eligibility date for an airdrop requires a query and a snapshot, we’re seeing a number services pop up to support querying the public ledger and storing that snapshot for use in a smart contract. This has led to inevitable issues, such as those experienced by Adidas during its Bored Ape Yacht Club drop. Their snapshot was supposed to include Mutant Apes, but mistakenly had excluded some from their snapshot. This gaffe left some potential buyers out in the cold, forcing Adidas to delay the launch by hours while they resolved and pushed a new contract to the chain.

For a developer “fixing it in production”, this was an expensive mistake. Any interaction with the public chain will require paying for gas fees. Not a problem for Adidas, which net $22M from digital product sales at their launch.

Another downside, the lack of a support mechanism for challenges found during the purchase process. Adidas CX teams are flummoxed in live chat support channels, directing users to call Ethereum to achieve customer support.

The airdrop isn’t new, but the channels where we experience it, are. Consumer credit protection laws became commonplace a full 12 years after the original BankAmericard drop, preventing other consumer credit companies from taking advantage of the same mechanism. As much as the first credit card was a technological innovation of its era which thrived due to lack of regulation, so is the current state of web3.

Prior to the BankAmericard there were no consumer lending businesses. The lack of big banks willing to make personal loans allowed consumer finance to innovate, eventually leading to regulation. The same will soon happen with crypto and web3. Currently, the environment is open to speculators of all types, regardless of investment regulation and accreditation laws. That could soon change, though the current position of the Fed is a wait-and-see approach.

Where BankAmericard innovated with consumer, web3 is providing an innovation for the investor. The utility that airdrops and other means of value-creation provide mirror those innovations of 1958. What we do with it will determine its success. But make no mistake, it is by no means, a new creation.

Push is here. Just as Wired predicted in 1997. Just as it always has been.