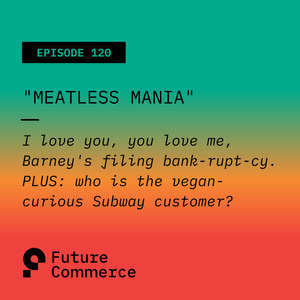 🎶"I love you, you love me, Barney's filing bank-rupt-cy!" PLUS: who is the vegan-curious Subway customer? Listen now!

The Cannibalization of High-End Pricing: What is the Cost of Discounting?:

The Competitive Edge: Battling Against Giants:

Weed and Iced Tea: The Pairing You Never New You Wanted:

Brands Mentioned in this Episode:

As always: We want to hear what our listeners think! Where do you see the high-end department store model in five years? Is cannabis a sustainable business model when it comes to partnering with non-cannabis brands?

Have any questions or comments about the show? You can reach out to us at info@futurecommerce.fm or any of our social channels; we love hearing from our listeners!