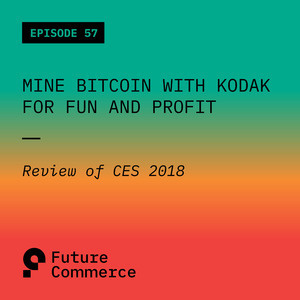 This week, Brian and Phillip get bullish on VR, talk hype in cryptocurrency, and wish for a facial recognition burger ordering system. Listen in for a recap of CES 2018 and all the interesting news in retail tech.

Predictions we made in December have already come true: 10 days in:

Phillip predicted that companies would start using personal attributes to tailor products to you. Two new strange developments to report on that prediction:

Bitcoin in the news:

By no means our last words on bitcoin:

Why we talk about seemingly tangential tech:

More on voice and recognition:

We'll be at NRF next week!