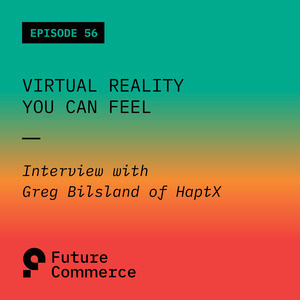 We're joined for a special interview with Greg Bilsland of HaptX to talk about VR for Commerce and how touch in VR isn't as elusive as you may believe. Impossible technology worth paying attention to now: how realistic haptics will add another dimension to our immersive experiences in retail and training.

What is the specific definition of symbolic and realistic haptics?

This seems like far future technology, but you're talking about it as current technology. Where do the technologies come from and what are its current and practical uses?

What is the broad industry specific use of this tech? Is there anything currently existing? How do you see haptics being applied in the consumer space?

Can you tell us the price point? Do you have a new product?

Will you see your product initially showcased by different companies showing off their tech to customers?

Could you address any critics that say your technology only further isolates people from having real world experiences?

Touch is something we've been missing from media. How do you foresee CMOs and marketers building out branding experiences with this?

So how much can you feel? Can feel something slimy? Can you feel weight? Texture?

Are you heading toward full body suits?

Does haptics add to presence illusion?

VR is still a novel experience

Retailers are starting to understand that certain tech can only be utilized and work in certain mediums. Are you enabling experiences and interfaces that couldn't already be realized?

Have you explored the medical community as well?

What's the use case for Augmented Reality and HaptX?

Any advice to our merchant listeners about when they should be investing in this?

Thanks, Greg Bilsland. Go check out HaptX.com for more information on this new technology.